In 2009, the Giro d’Italia celebrated its 100th anniversary. La Grande Partenza took place in Venice. The finish — for the first time since 1950 — was held in the Eternal City of Rome. The Italian air was electric. The tifosi were chomping at the bit. Dolce & Gabbana took it upon themselves to design La Maglia Rosa, and all of the popular Italian riders of the time were present to add f lair to the three weeks of racing. As a domestique riding for Rabobank, Maarten Tjallingii’s job for those three weeks was to support Denis Menchov, who had gone into the race as one of the favourites for the final victory. But Tjallingii was hurting, and hurting badly.

Sure, his legs were sore and his body was tired, but one issue tormented him more than anything: his butt hurt. No crème, lotion, or new chamois could relieve his sores. So, Tjallingii had to dig deep and push away the pain. He had to ride onwards, though he knew that Rome was still far away. He wanted to finish that momentous event. He needed to finish.

Menchov started well, winning the fifth stage to Seiser Alm in South Tyrol, which boosted the team’s morale. When the Russian took the pink jersey from Danilo Di Luca in the twelfth stage, an individual time trial to Riomaggiore, the team realised that they would have to give it their all to keep la Maglia Rosa all the way to Rome. For Tjallingii, who would rather have gone home after the agonising first week, this was the impetus that gave him the strength and morale to continue. And they pulled it off. Menchov took the pink jersey to Rome and won the 92nd Giro d’Italia (despite crashing during the final time trial). But what Tjallingii remembers that Giro most for is the very personal, harrowing sores he had on his posterior.

Tjallingii, which means ‘son of Tjalling’, hails from the province of Friesland in the north of the Netherlands. The way of life of the Frisians — a proud, stubborn, hardy people — has been shaped by the wind and the water. In the winter, they live for ice skating. When the ice melts in the spring, they keep their legs strong on the bike. So it was for the young Tjallingii. He soon discovered he had a talent for mountain biking. In 2004, after narrowly missing out on a spot on the Olympic team, he took to the road. He first rode for teams such as Marco Polo, Skil-Shimano, and Silence-Lotto, before moving to Rabobank and its eventual successor Team LottoNL-Jumbo. 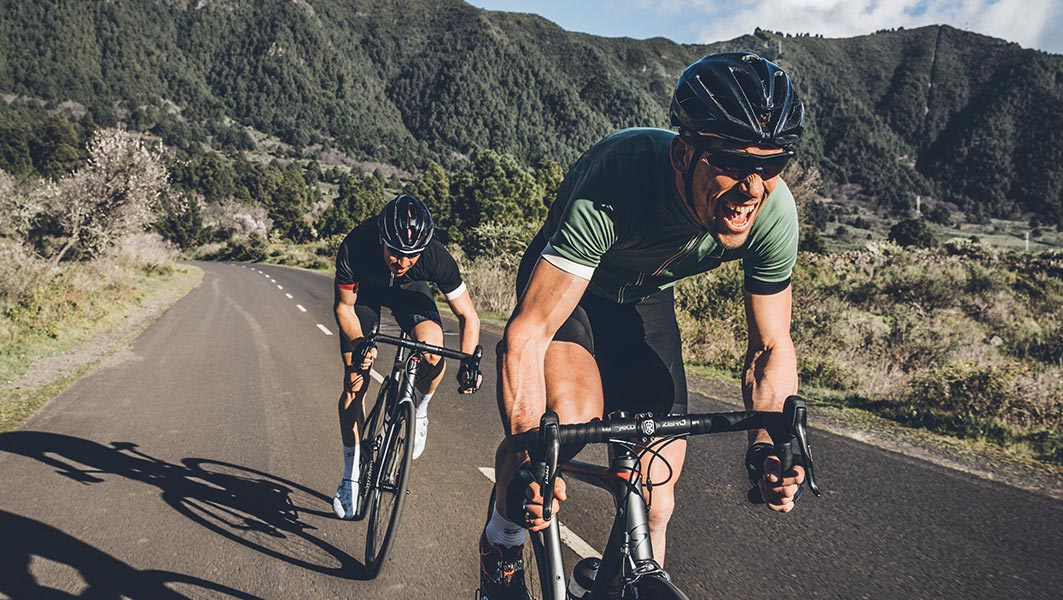 Tjallingii proved to be a solid all-around racer, a gifted time triallist, and a super domestique. He is not your typical cycling pro; he is a vegetarian, who happens to have only one kidney, and he has a knack for adventurous races such as the Tour of Burkina Faso, which he won in 2003. In 2006, he won the notoriously hard Tour of Qinghai Lake in China, after winning the Tour of Belgium earlier that same year. In 2011, he battled his way to an heroic third place in Paris-Roubaix, a definite highlight of his career. Throughout it all, he loved the bike. But after that painful Giro in 2009, Tjallingii realised that a good pair of bib shorts can determine whether that love will last or wither away in misery.

The Dutch cycling brand FUTURUM Quality Gear was established in 2014 by FuturumShop, a pioneer in online running-, cycling-, and outdoor-gear retail. Having served cyclists since early 2000, FUTURUM decided to apply their knowledge and experience to the development of high-end cycling apparel. When Tjallingii retired from professional cycling in 2016, he wanted to remain involved in the sport. A lifetime spent demanding the utmost from his body and gear provided him with a priceless trove of information, which he shared to help create FUTURUM Quality Gear. FUTURUM turned to him when it set out to develop the ultimate bib shorts for all cyclists. Maarten did not only have all of the experience from his long professional career to apply to the project, either; he also has a degree in technical engineering. Innovation is a part of his nature. He loves to get involved in the process of research-and-development. His unrelenting search for perfection drove his professional career and is his source of inspiration, as he heads into the future.

"Meanwhile, the plan begins to live more and more. We brought in several sponsors, which makes me think back to the past. Bringing in sponsors was also a requirement for me to be able to ride stress-free (as a pro). Unfortunately, you will not ride any faster, so training is my very first priority. If you ride regularly and train hard, then you have a little insight in your condition. Then you have a frame of reference, which I didn’t have. So I started with a baseline, an exercise test. Something that pros also do a number of times every year to determine where they stand. The result was reassuring, I kicked 340 watts at my turning point and 475 watts maximum. Only downside was that my basic condition was insufficient. Time to work on that!" 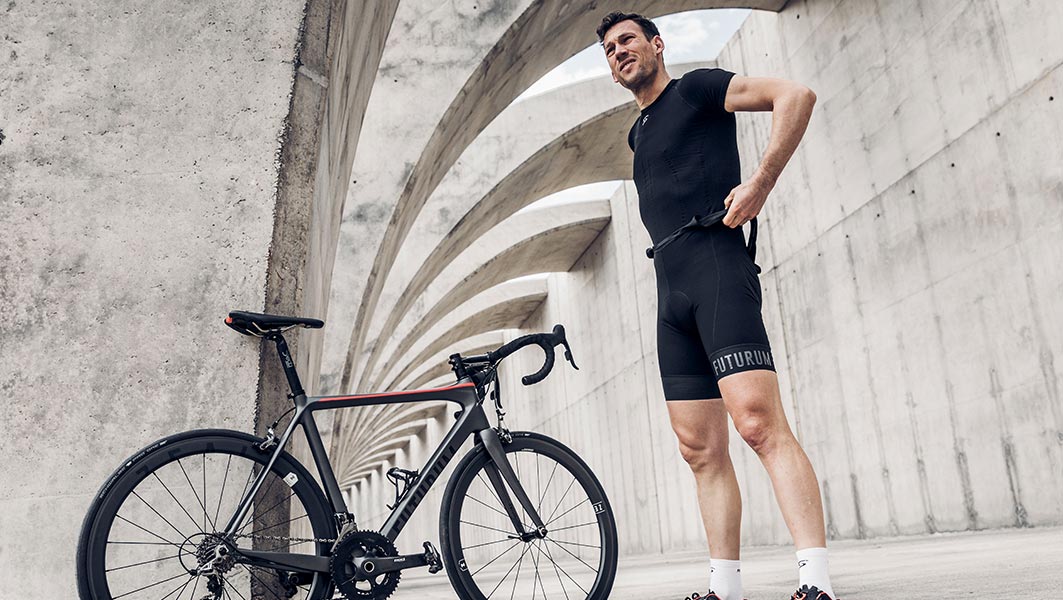 Because it is not only at the highest level of the sport that the smallest elements can be crucial to an optimal performance. For a professional, riding an arduous grand tour, every irritation is a distraction that might cause him to lose focus and might, at a pivotal moment, cost him a few critical watts. But weekend warriors, randonneurs, commuters, and enthusiasts all spend many hours in the saddle too. They too are all too familiar with how a stinging backside can spoil a day, how the hardships brought on by the elements or the gradient of the road can pale in comparison to the agony of a sore butt. Dreadful bibs, dismal days. Great bibs, cheerful days.

The quality and value of an excellent pair of cycling shorts cannot be gauged at first glance, but at second sight, you’ll notice the details that separate a great pair of shorts from a good one. The inception of a new bibshort starts on the drawing board, with a model. In this case, Tjallingi himself. Laying on his back on the studio floor, his body is traced to serve as the starting point for the design. It’s as if he were a dead person in an action movie from the 80s. The design team take up the drawings to create prototypes, and then their focus shifts to finding the perfect fabric. The panels, the stitching, the compression, the stretch are all important. It’s a matter of trial and error. That is where Maarten’s experience truly comes into its own. Each step of his collaboration with FUTURUM is aimed at creating the best bib short possible. Fitting, feeling, testing, in storm and rain, in sun and wind. Washing, and then testing again. How do the shorts feel after six hours on the road? How do they fit when you ride in the drops? Does the chamois last? What can be done better? Maarten rides, scrutinises, and consults. FUTURUM listens, evaluates, and makes alterations.

FUTURUM Quality Gear's PROFORMANCE Bib Shorts JONA is the crown on the process that FUTURUM and Maarten Tjallingii have undertaken to offer the ultimate high-end bib shorts to all cyclists. Ultralight, fitting like a compressing second skin, and with an unsurpassed chamois; anti-bacterial, breathable, and comfortable. Washable at 30 degrees, UV resistant, and, of course, black: the only colour a pair of bib shorts should ever be. Inspired by and developed with the professionals and available to everyone — that is Quality Gear. That is the JONA.