Maarten Tjallingii left the pro peloton in 2016 after a brilliant professional career. However, it’s never too late for an ultimate #MYCHALLENGE. Maarten proves this with his new challenge: to participate in Cape Epic. In this second blog, Maarten talks about his preparation.

Also read part 1 in which Maarten explains how the idea for his #mychallenge arose.

"To be honest, I raised the bar for myself. Actually, Erik Dekker did. And it’s not just an everyday goal. No, it’s the Cape Epic! The facts: 624 kilometers and 16.650 altitude meters in 8 days on a mountainbike through South Africa. As far as I have experienced it as ex-mountainbiker, this is the race that is like the Tour de France for cyclists and as the Mount Everest for mountaineers.

After the Birkebeinerrittet in Norway in 2016, the Cape Epic is my first cycling destination since my retirement. In the intervening years, I rode far less than I used to do. So when I said 'yes' to this challenge - it was in last year’s summer -, I had no idea where I was on a conditional level. Given my other obligations, I knew that I would not have the time to fully train every single day. Therefore, the doubt began to strike. I had no idea what to expect. One day someone tells me that you can complete the Cape Epic without any training, while the next day Erik informs me that we are able to battle for the victory at the Masters 40+ course. I feel the same way, but only how?"

"Meanwhile, the plan begins to live more and more. We brought in several sponsors, which makes me think back to the past. Bringing in sponsors was also a requirement for me to be able to ride stress-free (as a pro). Unfortunately, you will not ride any faster, so training is my very first priority. If you ride regularly and train hard, then you have a little insight in your condition. Then you have a frame of reference, which I didn’t have. So I started with a baseline, an exercise test. Something that pros also do a number of times every year to determine where they stand. The result was reassuring, I kicked 340 watts at my turning point and 475 watts maximum. Only downside was that my basic condition was insufficient. Time to work on that!" 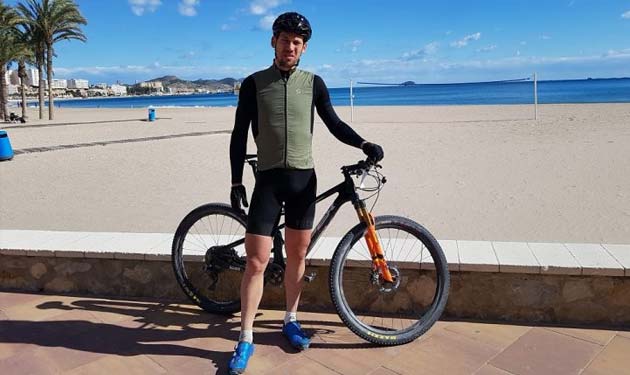 "After my baseline measurement, I made a realistic training plan, with a number of training sessions per week. Not 6 or 7, but 3 or 4. I often take the bike to an appointment and make sure that Erik and I train together. In addition to being physically ready, we also have to learn to ride and communicate together. These trainings are fun and educational and we discover each other’s abilities and personalities. A training is way different than a race, so we left in January for our first test race in Spain. We rode the Costa Blanca Bike Race, a 4-day mountainbike race where our technical skills where put to the test. The most important goal of this trip was to get and stay fit until the start of the Cape Epic on March 17. Short term versus long term goals, also something that professionals are good at. Know what you have to do in the preparation to shine in the race."

• Make the goal attractive to yourself. This gives you the motivation to start.
• Make the goal feasible by scheduling interim steps.
• The more factors you influence in advance, the greater the chance of success.
• Consider how you will celebrate your #MYCHALLENGE.